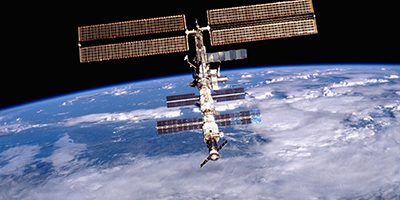 The perils of space flight often seem as boundless as the universe around us. From blastoff to splashdown, astronauts are exposed to a withering array of health hazards, including exposure to cosmic radiation, loss of muscle mass, lowered immunity, high blood pressure, and increased risk of infections that can have lingering effects.

Yet even after more than 60 years of manned space exploration, much remains unknown about the long-term effects of space travel on humans. In hopes of answering one of the key outstanding questions about space biology, University of Utah Health scientists, in collaboration with NASA, are preparing to launch an experiment to the International Space Station (ISS) that will evaluate the effects of space travel on bone marrow cells, called megakaryocytes, and their daughter cells circulating in blood, called platelets. Platelets curb bleeding and help dampen the effect of infectious diseases. The payload is being developed and could be ready for launch within the next year.

The study, one of 10 space biology research projects selected by NASA in 2021, could help amplify scientific understanding of how human bodies respond, adapt, and acclimate to space, says Matthew Rondina, M.D., professor of internal medicine and pathology at U of U Health and a study co-investigator along with principal investigator, Hans Schwertz, M.D., Ph.D., an adjunct professor of family and preventive medicine at U of U Health who practices at the Billings Clinic in Bozeman, Montana.

“This unique research will not only provide vital information about how to protect future space travelers from the potentially harmful effects of altered megakaryocyte function and platelet activity during and after long-term space travel, but it could also have important implications for health care here on Earth,” Rondina says. “What we learn from this experiment could broaden our understanding of what role megakaryocytes and platelets have in inflammation, wound healing, immunity, and tissue regeneration. This knowledge could potentially lead to new treatments for a host of autoimmune diseases and other disorders.”

Every adult has about 3 trillion platelets floating around in the blood stream. These cells not only form blood clots in response to bleeding but also are natural sources of growth factors and other substances important for maintaining healthy tissue. Previous studies have suggested that weightlessness, exposure to cosmic radiation, and the psychological stress of space flight can alter platelet activity, increasing the risk of hemorrhages and slow wound healing. In addition, scientists found that astronauts working on the ISS had an increased risk of blood clot formation.

To better understand this phenomenon, Schwertz, Rondina, and colleagues will explore how space flight might disrupt the function of megakaryocytes that are responsible for the production of platelets. They theorize that space travel could induce genetic changes in megakaryocytes that could impair platelet production, blood counts, and function.

The three-stage experiment consists of:

The NASA-funded study could lead to better understanding of how platelet activity can go awry in space, why inadvertent blood clots form in space crews, and how long these effects linger after space travelers return to Earth, Schwertz says.

The researchers have begun the ground-based experiments at U of U Health. Moving forward, they will work with NASA to establish flight hardware assessments and prepare for the launch of the experiment to the ISS, which could take up to a year.

“When you dive into it, it can seem to be overwhelming,” Schwertz says. “All the experiments must be precisely set up for space, which is a totally unforgiving environment. But at the same time, we must think about why we are doing this. It’s for the astronauts and how we can protect them better.”